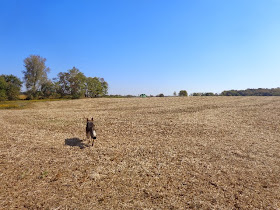 Aluminum is not an essential plant element and can be harmful to crop growth.  One of my young friends called this week and we talked about what we would do to raise our crop yields.  He had tried gypsum but did not notice results.  Fly Ash Gypsum from scrubbing coal powered electric plant stacks is helping keep fly ash our of our landfills and onto our soils.  Are we scrubbing the aluminum off the clay particles for better soil air and water movement and less damage from aluminum?  This is probably ten years old but I get these questions almost every day.

" Researchers at Ohio State University have found a way to use waste products from utility companies to stimulate plant growth in aluminum-rich soil, soil that's found on some farmlands and on strip-mined areas.


The technology could reduce the amount of waste products shipped to toxic landfills and thereby decrease the cost of compliance with clean air legislation, said Richard Stehouwer, a senior researcher in the School of Natural Resources at Ohio State University. He works at the Ohio Agricultural Research and Development Center in Wooster.
The waste is a byproduct of a new type of sulfur scrubbing technique used by Cinergy(now Duke Energy), a gas and electric utility company in Cincinnati. If field tests of the byproduct yield successful results in treatment of acidic soil, the process could be adopted by other utility companies.
Scrubbing is done by utility companies to remove sulfur dioxide from exhaust gases that are produced by burning coal. In most scrubbing systems, calcium hydroxide is injected into the flue gas stream and forms a calcium sulfite byproduct.
In the new process, developed by Dravo Lime Company in Pittsburgh, waste water from the scrubber is oxidized and combined with lime to produce gypsum and magnesium hydroxide. The new process could allow companies to recover usable products from the waste water.  "Magnesium hydroxide can be used within the power plant or marketed commercially," Stehouwer said. "The company hopes to market the recovered gypsum to companies that produce drywall and similar products."
But not all the gypsum can be separated from the magnesium hydroxide. This is where the process developed by Ohio State researchers could be useful, Stehouwer said.
In a greenhouse study of spoil from an abandoned coal mine, scientists found that the magnesium hydroxide enriched gypsum neutralized much of the toxic aluminum found in the soil samples. Soil aluminum poses little health threat to humans and animals but can devastate plant growth.  "In the top layer of our pots, where we applied the magnesium-gypsum treatment, we found a drastic reduction in the levels of aluminum," Stehouwer said.
But more surprising was the reduction of aluminum even farther down in the soil sample, indicating the magnesium treatment could travel easily through soil layers.  "In untreated soil samples, we found 500 to 600 parts of exchangeable aluminum per million parts of mine spoil," Stehouwer said. "But at depths of one to two feet below the surface where the treatment was applied, we found levels of 100 to 300 parts of aluminum per million parts of spoil."
Most plants require an aluminum level lower than 200 parts per million to thrive, Stehouwer said. Increasing the amount of calcium or magnesium relative to aluminum will also help to alleviate aluminum toxicity.
The greenhouse study also included soil samples from farmland in Ashtabula County in Northeast Ohio that had naturally occurring high levels of aluminum. Researchers grew a test crop of alfalfa in soil that had been treated with the gypsum-magnesium byproduct and found good levels of plant growth.
"What we're hoping to find in all plant growth on these treated areas is root extension below the treated depth of the soil," Stehouwer said. "Drought causes a problem for all plant growth, and strip-mined areas are especially prone to drought conditions in the summer. But if plant roots are able to extend beyond the surface treated depth, they can access the water supply deeper in the soil."
Researchers began field studies of the gypsum-magnesium soil treatment mixture last fall at three sites in Ohio. Studies of plant growth in two abandoned mine locations in Southeast Ohio and farmland in the Northeast part of the state showed good yield results this summer.
"There are around 900 abandoned coal mine sites in Ohio alone," Stehouwer said, adding that Pennsylvania, West Virginia, Virginia, Indiana and Illinois also have many of these sites.
"If this material works as effectively as we hope, it will help in the effort to return these areas to a healthier environment for plants and eliminate the detrimental effects of acid mine drainage."

This program has finally hit mainstream Ohio agriculture since the Clean Air Act was enacted!